Geoarchaeological Evidence for the Decline of the Medieval City of Qalhat, Oman

Posted on October 1, 2019 by michaelasecker

Today the ruins of the Qalhat are a UNESCO world heritage site. In medieval times, the ancient city of Qalhat was an important trade town along the shores of the Indian Ocean. The reasons for the decline of the city are unknown but speculations include warfare as well as earthquake activity. The research concentrated on the coastline in the vicinity of Qalhat. The morphology of the coast indicates that the earth surface must have moved upwards in recent times. This can clearly be seen by a staircase of raised marine terraces. Uplifted beaches indicate rather young movement. Evidence is presented that these vertical movements are associated with earthquakes. The paper concludes that the decline of the ancient city of Qalhat is likely related to earthquake activity. This is of relevance as a modern gas liquefaction plant is located along the fault which is the most likely candidate to be responsible for the rupture some 500 years ago. 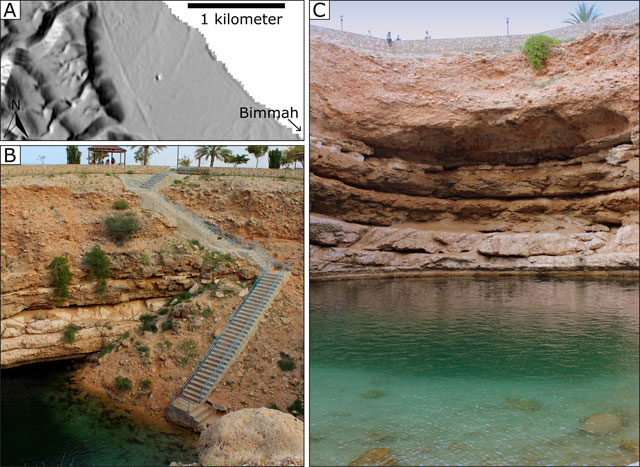 Example of karstification. The Bimmah sinkhole. (A) location of the sinkhole (dot in the centre) as depicted in the digital elevation model. (B) and (C) the stratigraphy exposed in the sinkhole shows Eocene limestone, overlain by deltaic Pleistocene deposits. Figure taken from the original paper.

This entry was posted in Uncategorized. Bookmark the permalink.